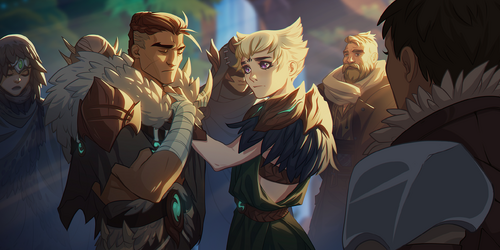 Back in the old Ramsgate we never saw too many Farslayer’s. There was Xelya, but her tale is more tragic than most, even for a Farslayer. Lost her natural family, and the Farslayer family that adopted her, too, within the span of just a few years . Probably why she's always preferred to hunt alone.

Most Farslayer’s live in small nomadic tribes that are more like large, extended families. They live, Hunt, and commune together. They connect to life, nature, the ground beneath their feet—in short, terra aether—and when they hunt Behemoths they seek out islands that are rich with it. When they clear Behemoths out, they dwell on that island for a while, thanking their quarry and their temporary home for welcoming them and keeping them safe. Then it's off to the next island, riding their handmade airskiffs to another island rich with life and lousy with Behemoths.

I don't think Xelya was expecting our new arrival anymore than I was. The Arbourhome tribe is rare among the Farslayer’s. They've maintained their connection to the terra, they still hunt the wild islands of frontier, but they have a home, a place where they build permanent villages and skybridges in the forest canopy. Sweeping arcs of woodcraft that would make you weep at their beauty.

It must be killing Xelya to see them brought low. The Arbourhome vessels, if you want to call them that, barely made it this far before giving out. These people are hurt, frightened, and still furious that heir only permanent home was been taken from them by a monstrosity I've never even heard of. But they're also Farslayers. They're not looking for anyone's charity. They simply need shelter, a safe place to figure out their next moves.

As far as I'm concerned, they're welcome to stay as long as they like. Farslayers are still Slayers, and many are as good if not better than most. I just hope Xelya doesn't find it too... awkward.