From Dauntless Wiki
(Redirected from Slayer)
Jump to: navigation, search 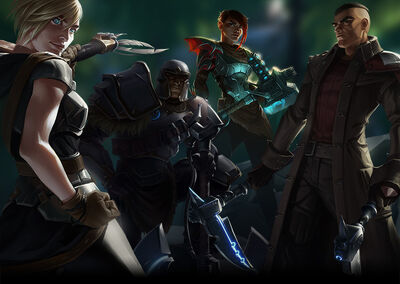 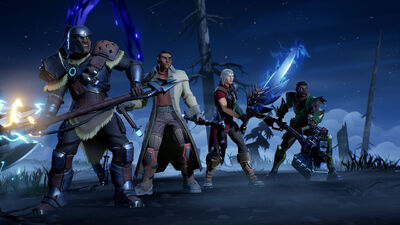 The Slayers are the last bulwark of the Behemoth-killers of old, and protect Humanity in The Shattered Isles.

Slayers live in and hunt among the Shattered Isles, where floating islands move across an endless sky and humanity lives among the broken pieces of their old world. With the recent advent of sky ships, explorers have struck out across the frontier in search of adventure, opportunity, and, in some cases, a fresh start. Ramsgate stands at the edge of this frontier as a final port of call before heading into dangerous skies. It is a city of artisans, merchants, warriors, explorers, and, of course, slayers.

Now, new threats emerge from beyond the horizon. Sightings of new, deadly behemoths pour in each day, and reports indicate the mighty beasts are more aggressive and fearsome than anything seen before.

You’re just steps away when you hear the thunder, see the lightning surge within the behemoth’s gut. Energy crackles across its scaly hide as terrible claws clutch the rocky ground. You move faster, dodging as the monster unleashes a scream of charged aether that sears your face as it passes. Ears pounding and skin stinging, you raise your axe overhead as the weapon surges with borrowed aetheric power. You deliver the killing blow and the terrible beast’s dying roar echoes across the island.

There’s no room for error when a two-ton, aether-fueled behemoth is looking to drive you from its territory. Master the following fundamentals if you want to survive the Shattered Isles of Dauntless.

Recklessly hacking and slashing is the way to an early grave for any slayer. Lose focus for even a moment and you could end up a behemoth’s next meal. Successful slayers study the beast’s attack patterns to find weaknesses, seize opportunities, and go in for the kill.

Behemoths are no mindless beasts, so don’t be surprised if one suddenly turns any advantage you find on its head. Fight a behemoth for any length of time and it’s sure to become enraged. When that happens, all bets are off. You’ll need to avoid faster attacks, more powerful hits, and deadly bursts of raw aetheric energy until the rage subsides. To add to the challenge, enraged behemoths can draw upon the latent aether of the Shattered Isles to charge their own attacks, unlocking powerful new abilities. Stay on your toes and seek your opening to unleash deadly strikes at the first opportunity.

Slayers use a different fighting style and unique combo attacks depending on the weapon they choose, whether that’s a powerful axe, a lightning-fast sword blade, a brutal hammer, or anything else the weaponsmith can create. Each has its use, though no one variety of weapon can guarantee your survival.

When mastered, combos deal massive damage to your target. Practice the timing of every combo, not just the simple ones, to become a masterful slayer. Join a hunting party of slayers armed with diverse weapons to ensure total tactical coverage against behemoths.

Targeting the specific anatomical areas of a behemoth will expose weak points and alter the beast’s attack patterns. Sever a tail, fracture a horn, or break some bones, and you might disable some of a behemoth’s attacks. Once victorious, you can take trophies from defeated behemoths that will be the envy of every slayer – and potentially provide special rare crafting materials.

Each weapon can be imbued with aether to enhance your power in different ways. Infuse your strikes with these elemental abilities and even the odds against the behemoths of the Shattered Isles.

Learning every weapon and studying the strengths of each behemoth will challenge your wits, skills, and dedication as a slayer. You will need them all to forge your legend on the frontiers of the Shattered Isles.