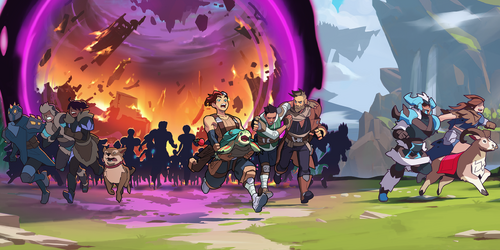 It was a nightmare. The sky falling down all around us. And there were... things in that darkness. Not just Behemoths, but other creatures too. Some seemed to run in packs, others spend as much time tearing into each other as they did tearing into the city. And in some cases, the people.

It should have been the end of us. Most any other city, town, or village in the Isles would have broken and given up. But not Ramsgate. We pulled together, fought together, and worked together to save as many people as we could. We got organized, because what good is saving the people if they starve to death without food or freeze solid without shelter, you know? So we didn't just save the people, we also got all the supplies and materials. And the animals, obviously! You think I was going to let my buddy Hector get eaten by a Shrowd?

Sure, old Arkan deserves the lion's share of the credit for figuring out that Portal Driver. But everyone pitched in, especially the Slayers. Of course they did. Kat Sorrel doesn't train selfish, greedy people. She trains, well, heroes if you ask me.

So here we are, and here we'll stand. We're not rebuilding our old home. We're just building a whole new Ramsgate, one that's the best it can be. We're gonna learn from the victories we've won, the times we failed, and the allies we've found. Yeah, we're under strange new skies, but it's nothing we can't handle. No matter how many times the forces of darkness and despair try to take Ramsgate down, we'll always come charging right back to life.