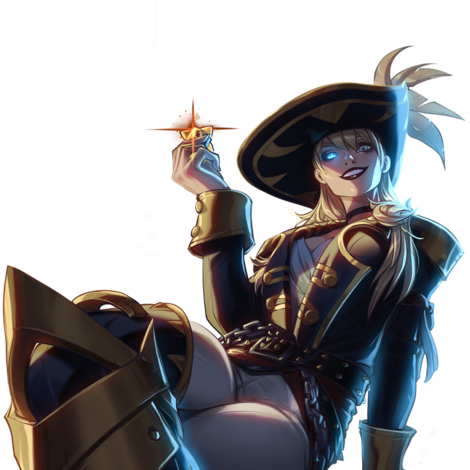 Lady Luck is one of the NPCs from Ramsgate in Dauntless.

Lady Luck was introduced in Patch OB 0.9.0 with the Fortune & Glory update. She is the one that is responsible for the Trials as well as the store. She is the one responsible for gathering the behemoths to the Trial field. Lady luck also goes by the name the “Corsair Queen” Lady luck is the owner of the corsair ship Fortunate Soul. She and Janek Zai have a past together where Zai seems to think of her as his nemesis.

"Tell me, have you ever considered the life of a Corsair?"

Lady Luck is the captain of the Corsair ship Fortunate Soul and commodore of a modest pirate fleet she calls the Stormchasers. She’s also the master of ceremonies for the Island of Trials: a competitive battleground where Slayers can prove themselves against some of the most difficult hunts in the Shattered Isles.

"Even before I spotted her in the sky, I felt her heartbeat in the tempest."

She has never told anyone, even her most trusted crew, how she learned of the archonite-rich rock that became the Island of Trials. But when Lady Luck returned from a solo recon flight with an airskiff full of core samples, one of her eyes had been replaced with a sphere of pure blue archonite. After she tossed the first Corsair to ask about the eye over the side, the other Stormchasers learned to embrace the mystery.

The island does the impossible: it somehow creates Behemoths within its core. Lady Luck did not know how or why it worked, and neither did anyone else. But it gave the enterprising Corsair captain an idea.

"You bought it, you keep it. That's Corsair law."

The next day she set her ships to taking the island in tow. Her plan was simple: haul the big Behemoth—maker from port to port as a mobile competitive battleground for Slayers who wanted to test their mettle against the Island's powerful, mutated creations. If a port didn’t want the island parked on their doorstep, they could pay Lady Luck and her crew to take the island elsewhere.

Ramsgate instead asked her to stay, the Trials proving to be excellent training for rookie and veteran Slayers alike. Realizing the potential profits from such an endeavour Lady Luck agreed.

So far, no mutant Behemoths have stormed Ramsgate plaza and Kat’s Slayers are getting a spectacular workout.

The Lucky Break is Lady Luck's store. Items in the store can be purchased with

Gilded Marks obtained from completing Trials. The Top 100 fastest Dauntless Trial clears are tracked at the Wall of Champions each week in the Solo and Party categories. The Top 100 in each category will get access to the Champion's Gear.

The store has two different currencies. One being the Steel Marks and the other being the Gilded Marks