Blaze is an Element in Dauntless. 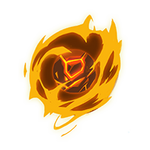 Blaze is the aetheric element of fire.

Blaze weapons are strong against

Frost Behemoths and also apply the On Fire status effect to behemoths with frequency based on total blaze damage dealt.

Blaze armour is weak to

Taking blaze damage from a behemoth will apply the On Fire status effect dealing damage over time for a duration (dodging will reduce the duration by 1/3 each instance.)

Blaze has its elemental orbs, Blaze Orbs, obtained through Blaze Patrols, breaking parts of Blaze Behemoths and by unlocking level 8 of the Blaze Escalation talent tree, you get an additional x5 Orbs on any Patrol.

*Heroic+ variants are only available in Heroic+ Patrols, they cannot be pursued.